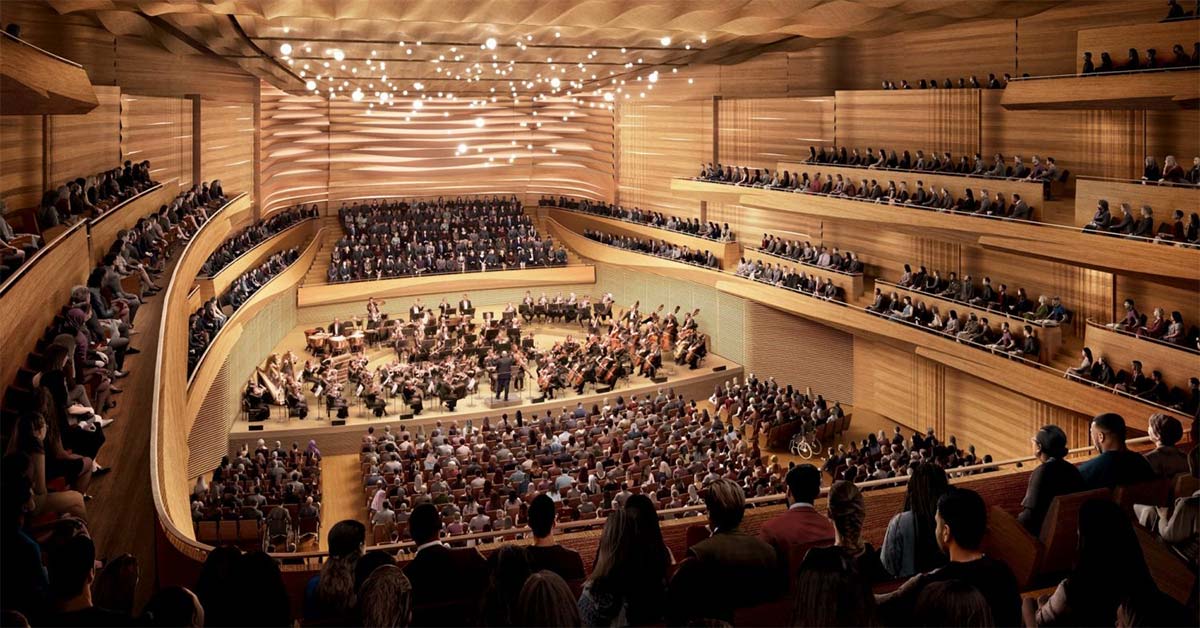 The Akustiks team is helping to reimagine David Geffen Hall at Lincoln Center, which seeks nothing less than a complete transformation of the building. The concert hall itself has already been stripped to the structural frame and a completely new auditorium and stage are currently being created within. The new concert hall will move the stage forward some 25-feet, allowing the audience to wrap around to the sides and rear of the orchestra platform. The result will be a hall where everyone is much closer to the musicians on stage, lending greater acoustical and visual intimacy to the experience. The walls of the concert hall will be finished in wood, which has been carefully detailed to enhance the resonance of the hall, particularly at bass frequencies, creating a richer, more visceral connection to the music. The visual warmth of the wood panels will be complemented by its shaping, which is driven by acoustical prerogatives and will give the room a luxurious sculptural quality. The renewed concert hall will seat 2,200 people, a reduction of over 500-seats, striking an optimal balance between acoustics and seating capacity. In the process, subtle but important improvements are being made to sightlines in the hall, with a special focus on the orchestra floor. And in a move harkening back to the original 1962 Philharmonic Hall, the curving geometry of the seating on the orchestra floor and in the balconies is being restored, returning a sensual quality that this mid-Century modern landmark originally featured. In addition to the work in the concert hall, public spaces throughout the building are being reconceived to craft a more gracious patron experience from the moment you enter the building to the instant when you arrive at your seat for the performance. The forced closure of Geffen Hall by the pandemic has allowed Lincoln Center and the New York Philharmonic to accelerate the construction process, and so the transformed David Geffen Hall will welcome musicians and audiences back in the Fall of 2022, nearly 2 years earlier than originally planned.